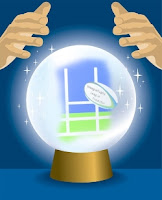 After last weeks "average" rating, we're certain our predictions this week will be far more accurate.

Cumnock v Cambuslang - this is 8th v 10th with both teams having conceded more points than they've scored.  A win for Cumnock last week will give them some confidence, but Cambuslang have played two teams in the top 3, so can't be too disillusioned with the way things have gone so far. Will go with home advantage being the difference.

East Kilbride v Allan Glens - West 1 game of the day.  Glens last week looked good, strong in defence and clinical in attack.  The new coaching team led by Jules Murciano have added a bit of steel to the team, but in the past few weeks, EK have added their own “Steel” which has helped bring two wins out of two. Away win.

Strathendrick v Annan - Another good looking game with 6th v 4th.  Endrick learnt last week that if they want to compete at the top of the league the quality level needs to match the intensity level, as errors cost points.  Two good league wins for Annan against Clubs who would have started the campaign expecting to be challenging for the title means this will be close.  Will go home advantage.

Garnock v Kilmarnock - who’d have thought that two weeks in, Garnock would have lost as many league games this season as they did last. It's a must win for them if they are to be competing at the top of the table.  Killie could be in for a bit of sore one here.

Irvine v Dalziel - one win apiece so far.  Irvine beat Killie by 8 points, Dalziel beat Killie by 9 points, so guessing there won't be much in this one.  Should probably go with home advantage, but got a sneaky feeling Dalziel now realise how difficult this league’s going to be and the coaching team have had a few harsh words with the players. Away win.

West 2:
Paisley v Strathaven - Can't decide if this or the Shire v Lenzie game will be West 2 game of the day.  A win and a loss for both Clubs, and they've been tight - both have beaten Wigtownshire. Will go with home advantage.

Wigtownshire v Lenzie - Wigtownshire have two losses in the league, but they're no mugs.  Tough ask for them this week though, with Lenzie having scored 93 and conceded only 14 in their two games. Away win.

Clydebank v Uddingston - Uddy sit top of the table with a points for total of 156.  Clydebank have a win and a loss to their name, but got to go with Uddy after their flying start to the season.

Loch Lomond v Bishopton - Bishopton have two bonus point wins so are sitting joint top.  Lomond have two losses and sitting joint bottom.  This is a big test for both of them, and got the feeling it might be closer than the league positions suggest. Will go away win, but don't expect a big scoreline.

Cumbernauld v Millbrae - between the two of them they have one win, have scored 47 points and conceded 169, so this doesn't have the makings of a classic.  Looks like being a tough season for Millbrae, but you can never tell with them.  Home win.

Helensburgh v Oban Lorne - Both came down from West 1 last season, but it's Oban who are looking to be title contenders with two wins, whilst Helensburgh are still looking for their first win.  Away win.

West 3:
Lochaber v Birkmyre - Lochaber have started the season with two wins from two, but this will be their toughest test to date. Think it's going to be tight, but the three hour bus journey must give Lochaber the advantage. Home win.

Hyndland v Cowal - Hyndland have also played two and lost two, whilst Cowal had a big win last week against Uni Medics.  Including the Bowl, this is Cowals fourth scheduled away game in four weeks (but the Clydesdale game didn't happen), so could this have an impact on availability.  Away win.

Glasgow Uni Medics v Shawlands - Uni Medics lost to Cowal last week, but had big win against PSG.  Shawlands had big win in Bowl, but big loss against Mull.  With students still arriving at University this could be a good time to get them, but will go home win.

Isle of Mull v Clydesdale - well we could tell you that Mull have a win & a loss and currently sit fourth thanks to a try bonus point, but the bigger issue is that Clydesdale haven't yet played a game. There were "pitch issues" for their first home game and then they couldn’t get a team to travel 35 minutes up the M74 to Shawlands, so we're not confident they’ll get a team to travel 3 hours to Oban and then whatever for the ferry trip.  If Clydesdale travel, home win.

Last weeks competition saw Bruce Beggans take the round with an 88% success rate (100% for both West 1 and West 2). 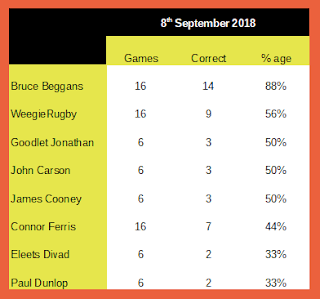 We don’t know the strategy Bruce uses (yet), but ours is supposedly based on recent results; but if we're honest, there's a healthy chunk of gut feel added to the mix.  However, Daniel Williams has gone several levels beyond this by putting together an algorithm (based on a pro rugby predictor) for the West league competition.  Not only does he predict winners, but there's also a probability of a home win, away win as well as a draw, and the cherry on top, a predicted score difference - really, he has.

Here’s Daniels predictions for this weekend. 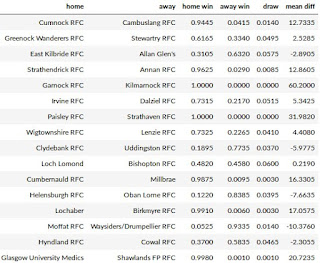 If you want to take part in our wee competition, then leave your predictions in a comment below, or send them to us via Facebook or Twitter. 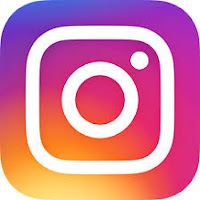